Yay, it's here! Update #4 (on time for once, forgive me). Paradise here to give a pretty hefty update as promised in Dev Update #3! Sit back and enjoy the read and WOW what's this? Another outfit preview?!

In the previous update, I stated that I am struggling a little bit with the plot, but overall I am genuinely happy with where it is headed. I feel like the characters are coming into their personalities which is making the story entertaining for me to write! I did get a question or two asking if, for example, 'Rei's sarcasm' would stay the same. For the most part, the characters will remain how I originally intended to write them, with just a few changes here and there to make their personalities come through. One character in particular would be Griffith. I know that, in the demo, he did not have much of a personality, but that was the intention! Griffith is a difficult character to write because he has to work in tandem with Leo, who is boisterous and speaks his mind. In order to write Griffith properly, I feel like his personality has to be built over time rather than be presented all at once like Leo. So, all you Griffith/twins fans should have something to look forward to!

Another point that I would like to mention is that if you want the full experience of the game, you will have to play all of the routes! This may be a little bit of a spoiler, but in each of the routes, Rei will be molded to each of the characters personalities. This means that Rei's path and even personality throughout the game, may (or may not) change dramatically based on who you pick to pursue! (Oh and uh... maybe a true end thrown in to one of the routes.)

So I want to preface this section by saying thank you to all of the people who gave their feedback on the idea of sectioning the game into parts. It really helps me figure out what the best option is for releasing the game. It may take a little longer to release the game fully without the episodic release, but I will try to compensate by posting more updates (as said in the previous update). I am hoping for bi-weekly at the least, but I will try to do weekly updates during the summer and most likely bi-weekly when uni resumes in the Fall! I would also like to say thank you for taking your time to write such kind comments! One issue I have is the idea that I have to rush release the game which obviously stresses me out, so it really calms me down to read your comments telling me to take my time and cool it!

As of right now, there is not a set release date for the game since so much of the plot has to be rewritten. This pushes quite a bit of progress back considering voice acting, CGs, BGs, and even sprite iterations depend on the plot. Don't worry though, the finished plot will still be in the range of 100k-150k+ words. Much of the script right now is being rewritten from scratch, but the outline for it is completed and I am about 1/4 of the way finished with the writing since I have restarted (aside from edits and rereads and whatnot). So for right now, the plot is my main focus with sprites coming second, and CGs to be started once I am comfortable with where the plot is.

One other thing is that many people have been asking about what the price for the full game will be. The price will be in the range of $10-$15. I'm sure I will have to re-answer this question many other times, but if you are reading this, then there is your answer!

What's weird is that after Minami, I have no clue who I drew next. I'm pretty sure it was Rei??? Maybe Aiden?? Anyway, Rei is the main boy so he probably should have been created first...But since he wasn't...does that make Minami older than him? Is Minami actually the oldest? OH, the outfit preview, uh, right! That's what this was about.

What most people may not know is that Minami was the only character that had more than one iteration. Even Rei only went through a hair change; which isn't actually an iteration because that hair will still be used (you'll even see it in another outfit preview). As with Minami's outfit preview, I figured one of Rei's date outfits would be a cute addition to what you've already seen! I mean, even if you can't date him, he still has to look hot, right? Not to mention, I've even added a few expressions and, hmm? Cat ears? 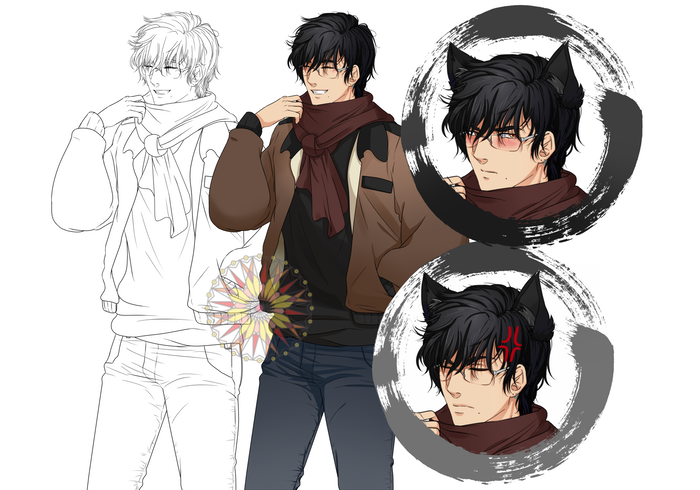 What do you think? Cute? Hot?

Who would you like to see in the next update? Let me know!

As I said in the timeline section, backgrounds are delayed quite a bit while I figure out a way to minimize the BGs used in the plot. Right now we are looking to finish at around 25-30 backgrounds total (not including the side stories and additional dates).

So, this will be the last BG preview for the next few updates!

Since we are featuring our beloved little psycho, why not have a crime scene background featured with him! But uh, don't be fooled, he won't be going on a date here, even if some of you freaks may have liked that... 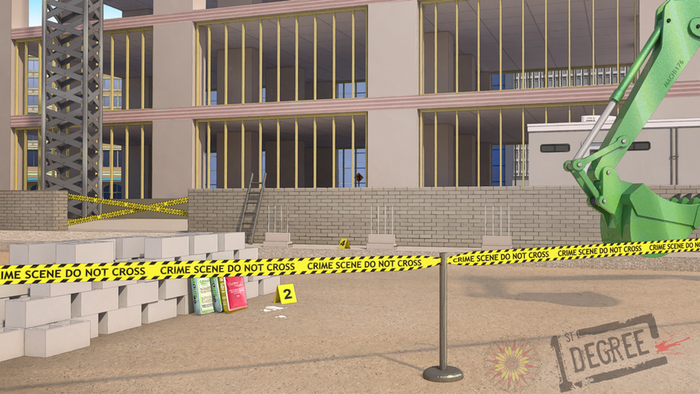 Well...maybe a date with a victim?? I'm sure Aiden would be here too though.

Where would you want to go on a date with your love interest(s) of choice?

For those of you who purchased the poster add-on, we finally have the preview for you! Just remember that the only people who will receive the colored version are the people who bought it! Meaning that if you did not purchase the poster, this preview is all you're getting~ They will also be signed by me! I will be ordering the posters by the end of June and will be shipping them out as soon as they arrive. So, if you need to make any adjustments to your addresses, please shoot me an email at parivalgames@gmail.com 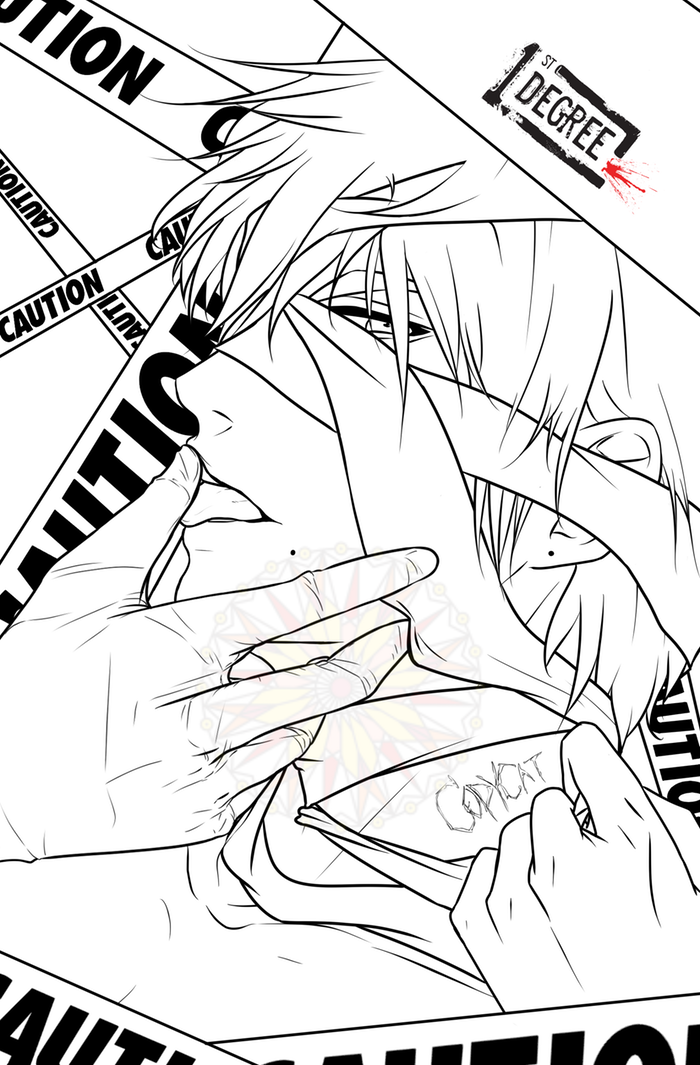 If you would still like to purchase the poster add-on, you can also send me an email saying that you are interested in buying one. The posters are $30 with free shipping to the U.S. and if you have not purchased the add-on by this date, there is a $7 international shipping fee. If you are wondering about the material, the posters are going to be 11x17 vertical with a glossy finish.

6) The Surprise I Promised

Last update, I said there would be a surprise here, and there is! When I first posted 1st Degree's kickstarter campaign, we were supposed to have a simple trailer (don't get too excited, this isn't the trailer as the surprise). Unfortunately, between two completely different parties of video editors, we were not able to have a trailer created after almost a month and a half of trying to get one made. The first experience was just by miscommunication and price and the second due to just unfortunate timing. So sadly, our campaign did not have a completed trailer. However, we are very thankful that even without it, we were able to surpass our goal, so thank you all for that!

Though we may not have had a trailer for the demo, we do have the music for it. So that is the surprise! Please have a listen to it if you are interested! It was created by our music producer - Red Robotix.

Now even though the demo doesn't have a trailer, the full game may have one! Even though we were somehow just super unlucky with how the trailer didn't work out, I would still like one in the future! If you are a trailer producer/video editor or if you know anyone that is, feel free to email me at the email in the poster preview section. We obviously will not need a trailer for a very long time, but we may in the future!

Anyway, thank you so much for reading and I hope this update was to your liking! If you read through everything, please feel free to answer the bolded questions in the outfit/BG preview sections if you have the time to do so!

Also, I love hearing feedback, so any that you have is valuable information!

I would also like to mention that we do have a discord, so feel free to join if you would like to have a chat with the devs or enjoy some friendly convos with weirdos just like you and me~

Red looks cute with the ears 😍